MOUNT KILIMANJARO
Rising above the hot and dusty Maasai Steppe in northern Tanzania is a Mountain with its flat top white with snow stark against the blue African sky, it is Mount Kilimanjaro, the highest mountain in Africa, the highest free-standing mountain in the world, and one of the largest volcanoes ever to burst through the earths surface. Situated only three degrees below the Equator with snow and glaciers covering its peak,and just under four miles high it can be seen from more than 100 miles away on a clear day. Kilimanjaro is in fact a young mountain, roughly one million years ago there was probably a large river where it now stands. The formation of the Great Rift Valley two or three million years ago left deep fractures in the earths crust, and eventually many volcanoes broke through in the Kilimanjaro region. Circa three quarters of a million years ago Mawenzi – Shira – Kibo broke through the surface to reach a height of about 16,000 ft, and stretched in an east-south-west direction for about forty miles. Shira became extinct and collapsed and became a Caldera. The north – east side was covered by fresh eruptions from Kibo and the rest was eroded forming the present plateau with a height of 13,140 ft. Mawenzi and Kibo grew until they reached almost 18,000 ft and their lava mixed forming the saddle. Mawenzi became extinct first, its center collapsing like that of Shira. In a explosion the entire eastern rim burst releasing debris and water over an area of over 400 miles, creating a spectacular gorge.Lava seeping through cracks formed “dykes” which eroded and gave Mawenzi its jagged outline and pinnacles reaching to 16,890 ft.

Tourists who come to climb Kilimanjaro will be surprised by ever-changing fauna, which is known as “vegetational zonation” a term used to describe the fact that certain plants will only grow at certain altitudes, leading to distinct bands of trees shrubs and flowering plants that change with height. within these types of habitat live animals that have adapted to certain extent to mountain life. The bands of vegetation range from lush rain forests to permanent ice fields. Each zone occupies roughly 3,280 ft (1,000 meters) of altitude. Generally the temperature falls about 1’C for every 656 ft (200m) increase in altitude.

From circa 2,600ft (800m) to 5900 ft (1,800m) there is now grazing and cultivation and human settlements where there was formerly natural bush and scrubland.

From circa 5900 ft (1,800m) to 9,187ft (2,800m) is the most fertile area of the mountain, 96 percent of the rainfall falls in this area.this area is often covered by clouds. The forest is home to most of the mountains wildlife, though due to the thick vegetation and undergrowth it can be difficult to see the animals.You are certain to hear if not see the Black and White Colobus and Blue Monkeys, there are also bush pig and elephant and leopard but to mention a few of the animals to be found here. The bird-life is prolific.

From circa 9,187 ft (2,800m) to 13,120 ft (4,000m) is a forest of heath and moorland with giant heathers which can reach a height of 30 ft (9m) stretching for circa 3,280 ft (1,000m) becoming sparse as it reaches the 13,120ft line (4,000m) Commonly found heather are: Philippia excelsa which has white bell like flowers and Erica arborea which has cup-shaped white flowers. Senecio Kilimanjari a forest groundsel, are found at the higher levels and resembles a cabbage somewhat.the wildlife at this level include: the Four striped grass mouse – Mole Rat – and the Harsh Furred Mouse. the larger animals are usually en-route to other areas

From circa 16,400 ft (5,000m) there are Arctic conditions.Virtually the only water is in the form of snow and ice, the Oxygen is half that at sea-level, and the radiation from the sun is extreme. The only vegetation is Lichens that grow very slowly, about 1mm per year and can live for hundreds of years. The only life that can exist in these conditions are a few spiders living on insects borne by the wind. The summit is a crater which was once was a rounded dome that collapsed , inside is a inner crater which is called the “Reusch crater” inside which is a cone rising 390 ft above Gillmans point. The hot gases and yellow sulphur deposits show that the volcano is still active. 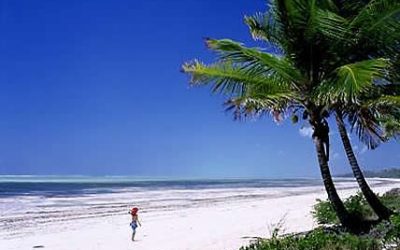 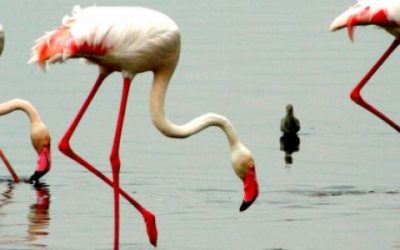